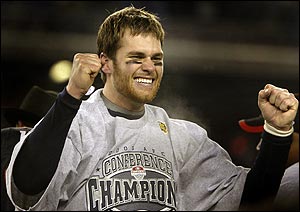 Way to go, Pats. And if you are like me and have been a Pats fan for a while…isn’t it amazing how they have transformed from joke of the league (even when they were IN the Super Bowl in 85) to class of the league (3 super bowls in the last 8 years)?

According to the Boston Herald, Trot Nixon contract talks appear to be going well:

Though there are still issues to be resolved, the Sox and outfielder Trot Nixon [stats, news] have been having productive talks on a three-year contract that would keep Nixon in Boston through 2006. The deal would likely average $6 million to $7 million annually, placing the entire value of the package at $18 million to $20 million.

Trot has gone through swings in his career where he has been pretty overrated by Sox fans (Trot for Sosa? no WAY!) as well as pretty underrated. The bottom line is that he is an above average fielder, and a pretty good hitter. Maybe I haven’t figured in the impact of what looks to be a market correction, but it looks to me like 6-7 million a year until he is 33 is pretty much a hometown discount from the Trotster…

Who remembers what awful movie that line is from?

In my opinion, this is the best NFL weekend of the year. You have TWO games for a shot at all the marbles, and unlike the Super Bowl, the emphasis is on the games. Doesn’t hurt when your favorite team is one of the four that are left.

This week, I will be sitting in front of my television on the nice warm couch, rather than freezing my butt off in Foxboro. Don’t get me wrong; if I was able to get tickets (and I tried), I probably would have gone. But I’m just as happy to be sitting home watching it after last weekend!

Anyway, my official prediction is for a Patriots/Eagles Super Bowl. The Eagles finally get the NFC Championship monkey off their back, and Manning is hurt by the fact that he isn’t playing against a flag football defense.

In Sox news…well, there isn’t much.

You want to make something of it?

These two, and that’s it. You see above I tried to blend the Google ads into the banner. And on the left, you see an Amazon.com box.

Here’s my reasoning…if the google ads generate $1 a day, this site pays for itself. With a little left over for some drinks at the PSF.com outing. As for Amazon; who here hasn’t bought something there? So if you are going to buy something anyway, why not start here and search for what you are looking for?

And if nobody clicks on them, then I’ve wasted 15 minutes of my life.

1. Contrary to what you may think, you are NOT the world’s foremost expert in football. If you were nearly as smart as you think you are, you would be working as a coach. I hate to break it to you, but bold pronouncements such as “They gotta get a running game going” and “As far as I’m concerned, this is four down territory” aren’t nearly as brilliant as you make them out to be.

2. When it is ZERO degrees, is there a need to have 7 more beers? Especially when you’ve apparantly had double that before the game started? Not to mention that 3 of those 7 ended up on my blankets.

3. Funny how you quieted down at the end, when ALL I heard from the time he missed the kick until the time he hit the eventual game winner was how Vinitiari was ‘killing’ the Pats all year and how much he sucked. Maybe I’m crazy, but as far as I’m concerned, what he did in the 2001 playoffs earned him a free pass until he shows up on the field to kick with a blunt in the corner of his mouth and a hooker on each arm.

4. Yes, it is important that the home crowd make noise when their squad is on defense. However, it is not necessary to scream at the top of your lungs from the time that the other team gets the ball until the next time your team gets the ball….including in between plays and during commercial breaks. On a related note, it doesn’t make the people around you worse fans if they don’t choose to partake in said continuous screaming. But we all appreciated the sarcastic..”Oh; it’s third down, NOW you cheer” comments.

What’s funny is that even the people you were with, including your girlfriend, thought you were an a-hole. You should have heard them talking about you every time you went to get another beer.

Other than that guy, and the BRUTAL cold…it was a fun game. And I got out of Foxboro in record time…took me 10 minutes to get from the stadium to 495.

This is what I’m subjecting myself to tonight. I must be insane.

Let me know how it works out for you.

Driving in to work this morning, ESPN radio was having a discussion regarding Hall of Famers. I won’t get into the NHL, NBA, and NFL discussion, because franlky,I don’t care.

They were talking about active players, who if they stopped playing today, who would be LOCKS for the Hall of Fame. Off of the top of my head, their list was pretty short:

I agree with that list, but I’d probably add a couple more. They argued about Griffey, in my opinion, he is also a lock. I think Bagwell would also be a lock. Of of the top of my head, others that come to mind may be Hall of Famers, but are not shoo-ins.

What do you think?

On NESN, there is a new show on Tuesday nights about the Sox Hot Stove season. Tonight was the inagural edition. There was a commercial at the end of the episode that may or may not have been on NESN before, but it was the first time I’ve seen it…

It starts as a montage of 2003 highlights…Manny’s Game 5 homer, Lowe getting the last K, things of that nature. This goes on for about 20 seconds. Then, one phrase closes out the commercial:

With thoughts of a

Has a nice…well…ring to it, doesn’t it?

After much deliberation, and a couple offers of $500 for the pair, I decided that I am indeed going to attend this weekend’s playoff game. Got my child care issues all worked out, and my father said he doesn’t mind freezing his behind off for his first ever Patriots game (only NFL game he ever went to was the Bears in the 60’s when he was in boot camp, but he is a Pats fan).

Should be a good game, as Tennesee is no pushover. I might have preferred Denver or Baltimore, but part of me also wants to see a competitive game.

On baseball, this is an interesting bit. Every year, Hartford Courant reporter and BBWOA secretary Jack O’Connell details his HOF ballot. Here is an excerpt, and you can follow the link for the detailed ballot:

Since 1985, the National Baseball Hall of Fame ballot has been as much a part of my Christmas season as tree trimming, gift wrapping and eggnog. It arrives during the first week of December, remains atop my desk and is perused and examined at various points throughout the month before the check marks are made beside the names of those deemed worthy of election and the envelope is sealed before the Dec. 31 deadline.

This year’s results will be announced Tuesday, and obviously not all 10 players, the maximum that can be chosen on a ballot, that I voted for will make it to Cooperstown. Most likely, it will be only one or two. With more than 500 Baseball Writers’ Association of America members of 10 or more consecutive years doing the voting, it is difficult getting a consensus considering that election requires that a player receive votes on at least 75 percent of the ballots
…
Of the 17 holdovers, several have received my support and will continue to do so. For that reason, I could not find a spot for Eckersley, not if it meant pushing Goose Gossage or Bruce Sutter aside. That doesn’t mean I will not vote for Eckersley in the future until Gossage and/or Sutter is enshrined. It just doesn’t seem right to jump on the Eck bandwagon so quickly when no other reliever has ever been a first-ballot Hall of Famer. Granted, Eckersley is a unique case since he actually had a dual career as a starter and a reliever, but he was no better than Gossage or Sutter out of the bullpen, nor was he superior to other starting pitchers on the ballot.